Your vegetables look great! It has been a productive summer here in Portland, OR too. The tomatoes and cucumber are doing great this year, the beans I have yet to harvest. Strange! My winter squash is doing about the same as yours. Growing wildly, but no signs of any fruit. 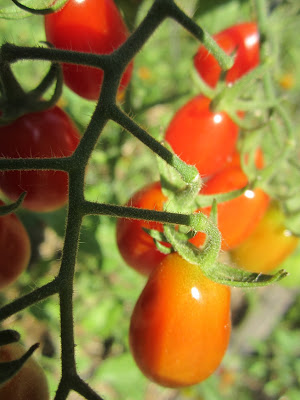 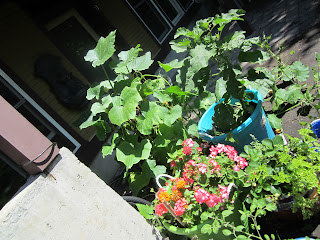 Posted by Michele Blair at 12:24 PM Links to this post

The summer if flying by and with August now here, it's time to show you the happenings in my veggie patch. In spring the ratio of bare soil to tiny seed creates an illusion of more space than actually exists. But in August, with gigantic plants overtaking the very same space creates a selfish longing for more soil in which to grow things next year. I have cucumber and squash plants overtaking pathways, so the quest for a fresh salad becomes a hike through the jungle. 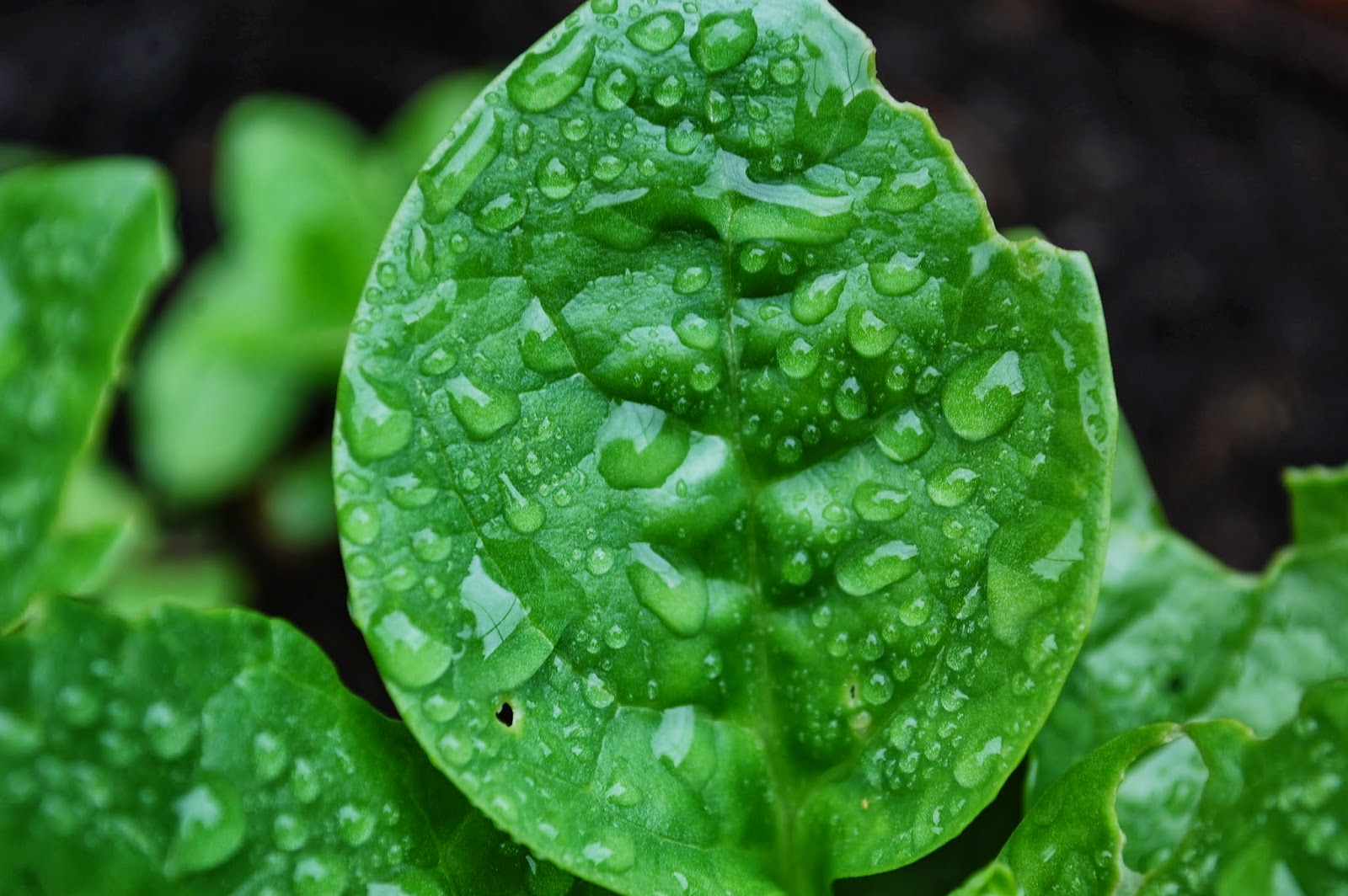 This is Malabar spinach or climbing spinach. In my garden it is not climbing at all. It's a few inches high and is primarily a treat for the slugs which are my biggest battle this summer. Still, the thick, rubbery leaves are attractive. I have these planted in a large terracotta pot with an upside down tomato cage formed into a pyramid-like shape. So far the tomato cage is bare. I had visions of it covered with this climber by now. If you want to see some spectacular specimens of this plant, check out John at Growing Your Greens on YouTube. He also shares a recipe using this plant. 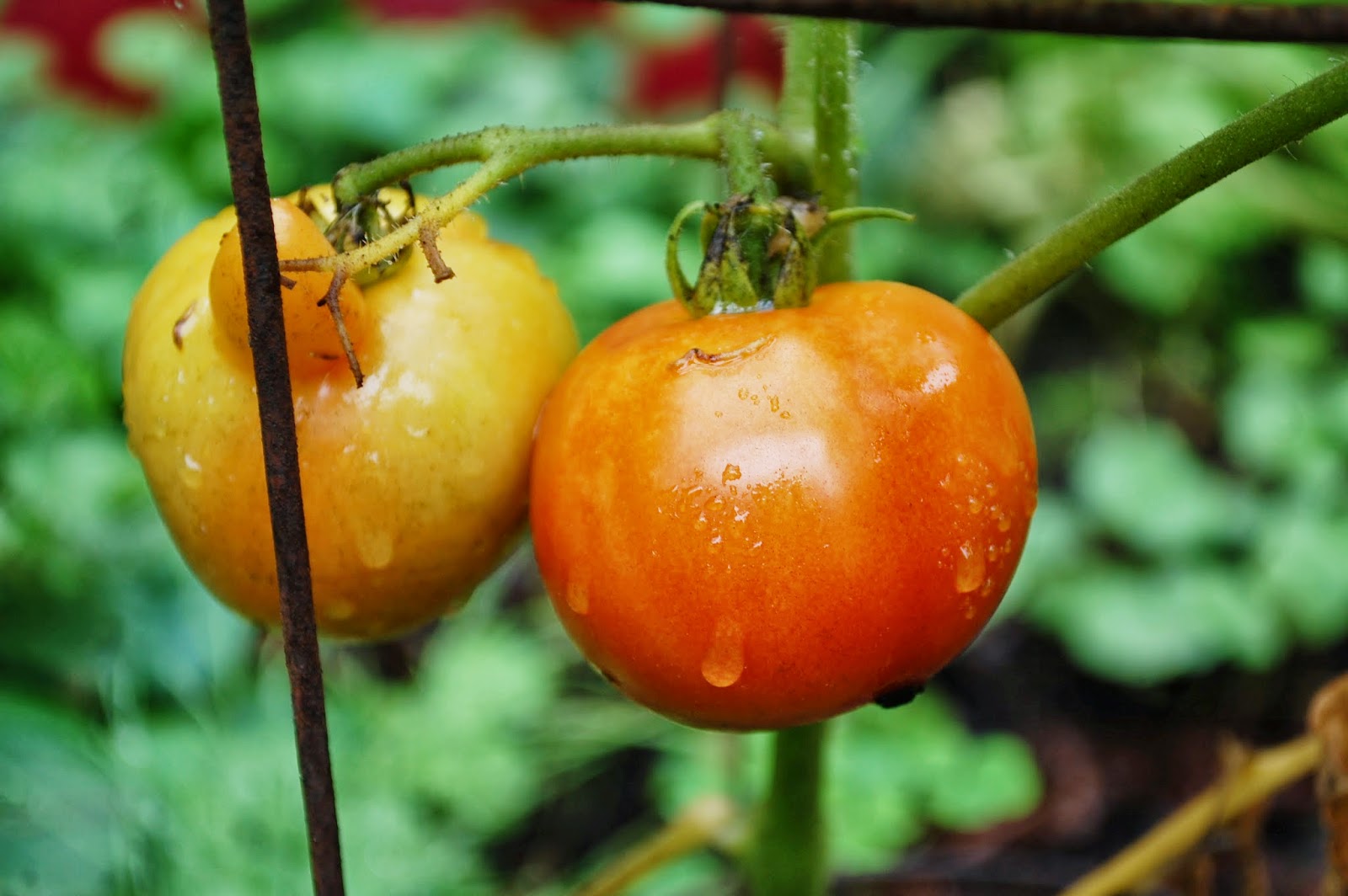 My Early Girl tomatoes are ready. We've also had some cherry tomatoes harvested for salads. 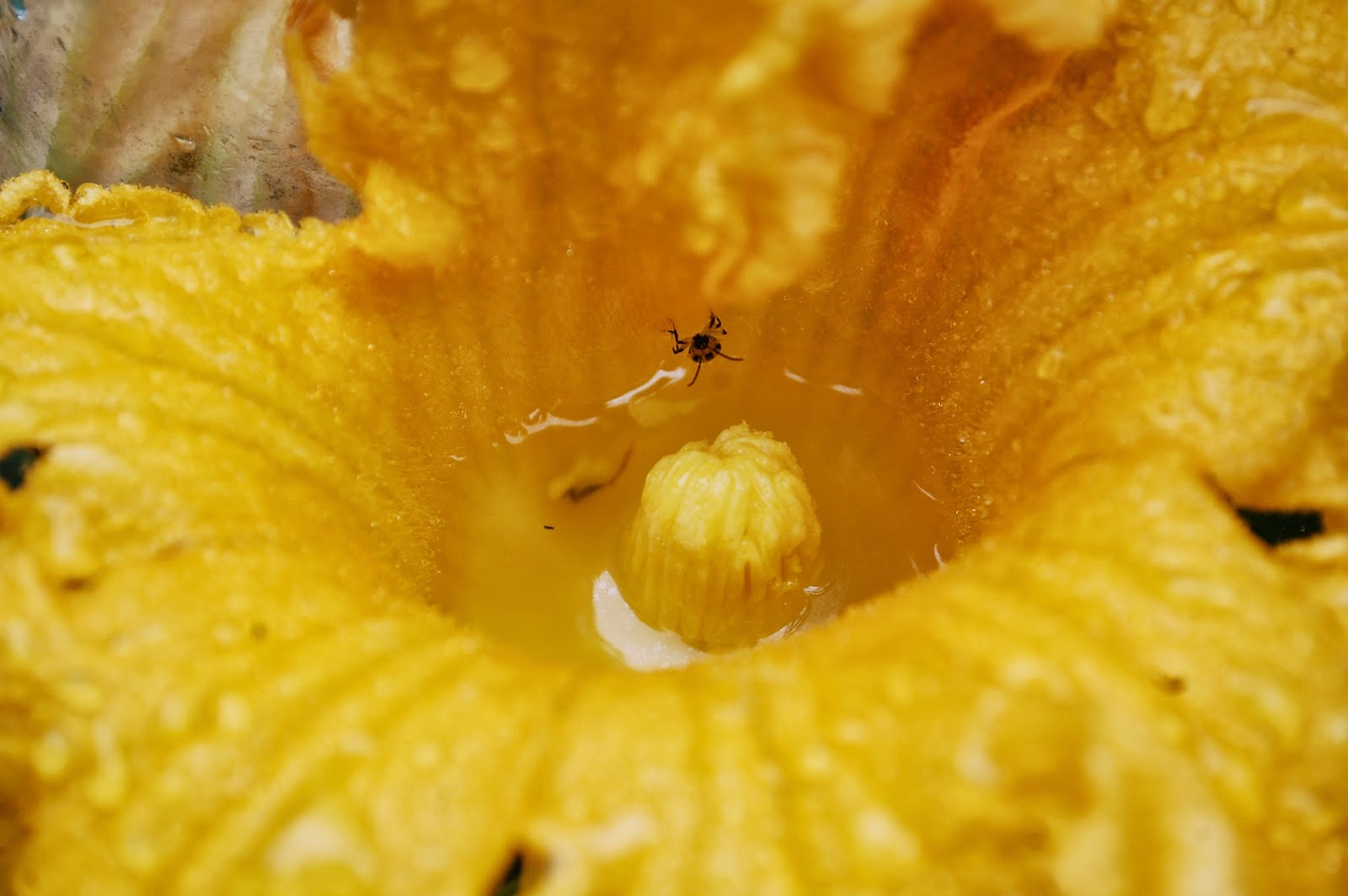 A Big Max pumpkin blossom filled with rainwater. So far many blossoms but no pumpkins even though I have seen honey bees enjoying the blossoms. 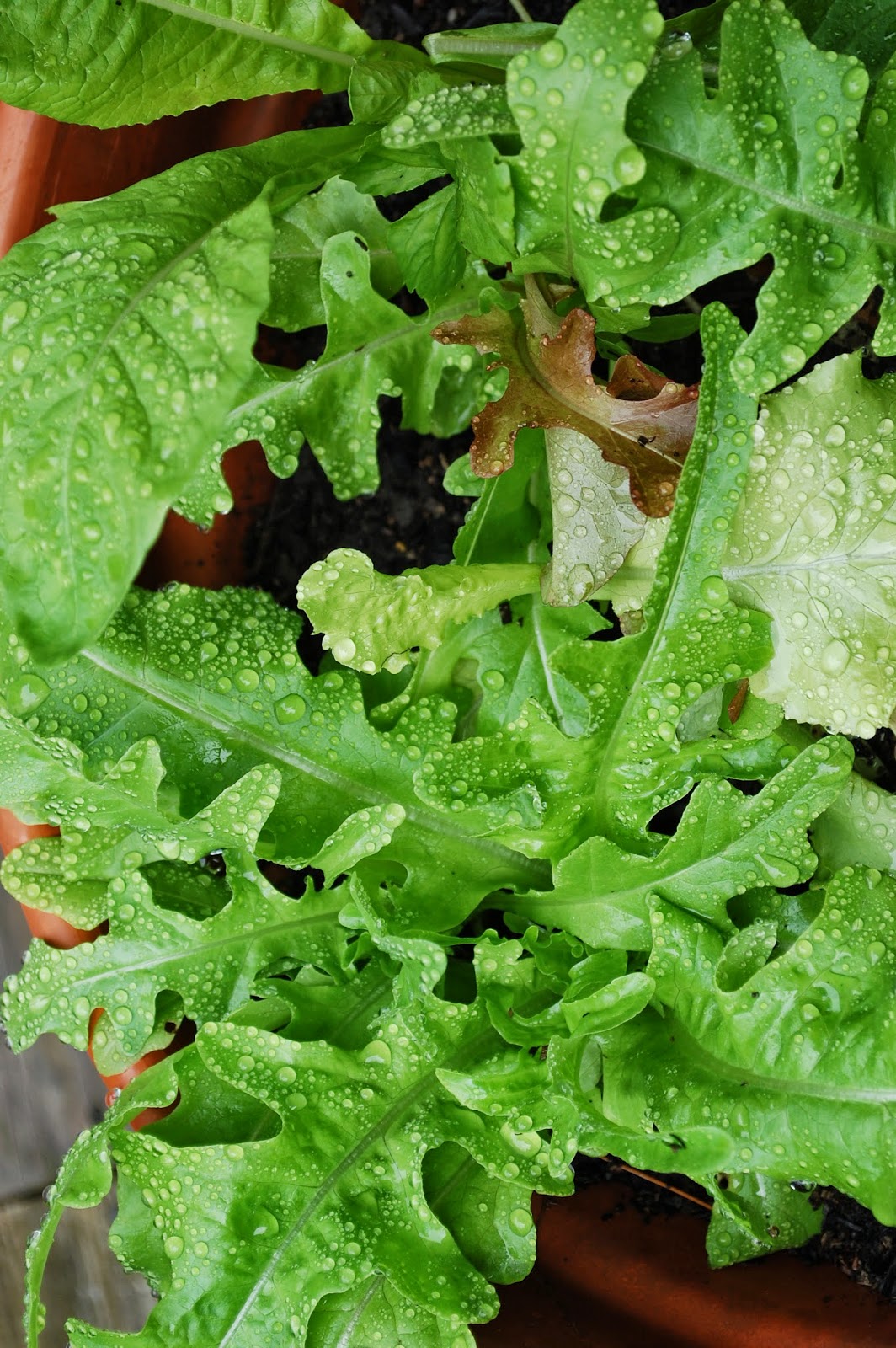 A mix of salad greens in a terracotta pot on my deck. 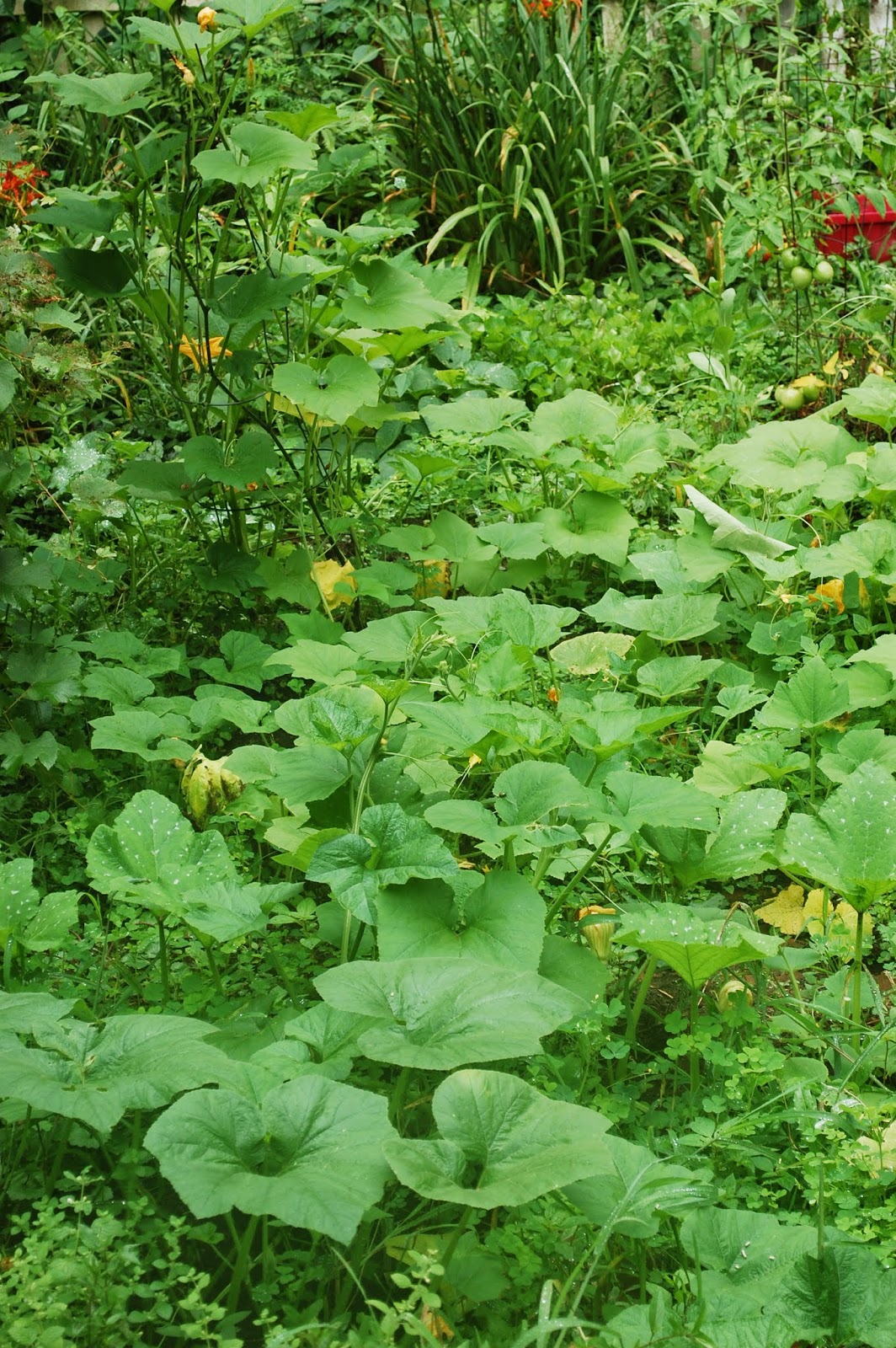 The patch of cucumbers and squash. In the foreground is the heirloom sweet potato squash encroaching on a patch of lemon balm and mint. So far I have only had blossoms and massive vines from this, but I'm holding onto hope that I will enjoy my first taste of sweet potato squash before the growing season is over. Along with the vines, I have many weeds which will be dealt with on the next dry, sunny day. 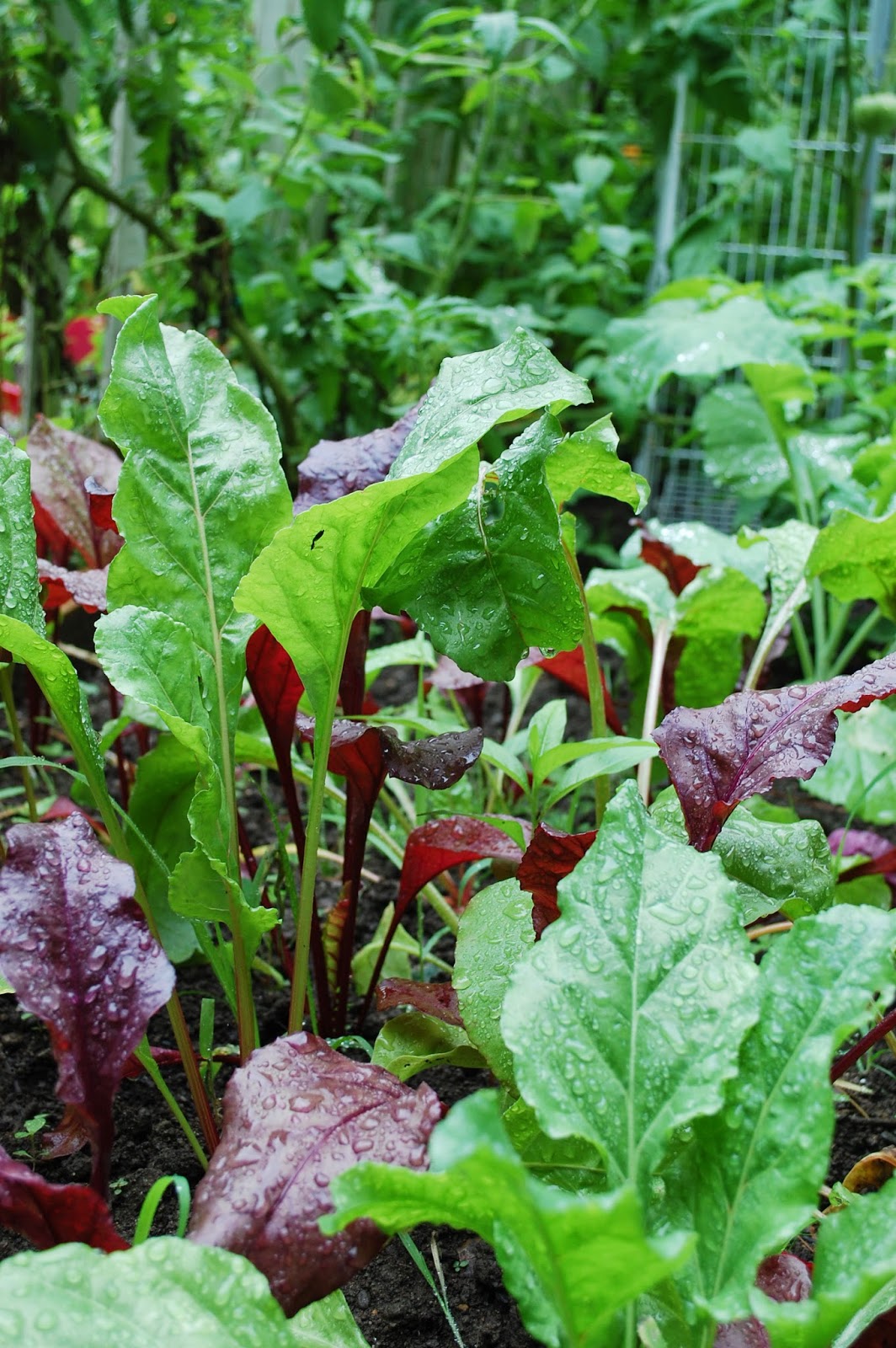 In my new raised bed, I am growing the three varieties of beets we shared from Baker Creek Seeds. So far we've harvested some greens and are looking forward to trying the beet root soon. I also have three varieties of heirloom tomato, pumpkins and a mix of leaf lettuce. The peas are almost done producing so those will soon be turned under to nourish the soil.

That's about all the news from the veggie patch. Soon I will give you an update on my summer flower garden.

Kitten in a Wheelbarrow 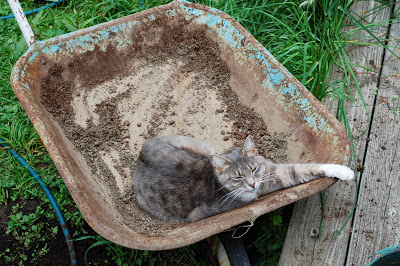 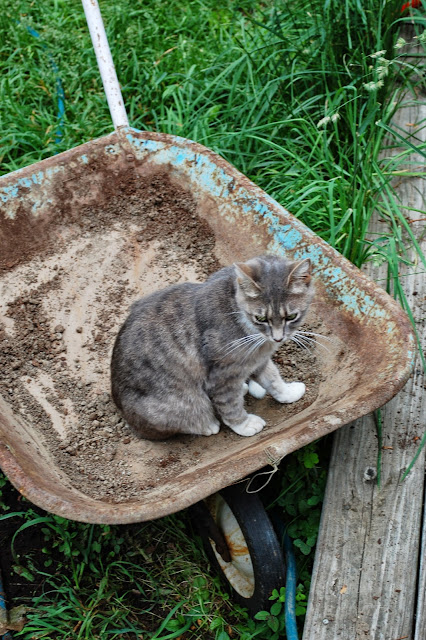 Chloe found a good resting place for a cat!
Posted by CK at 8:55 AM Links to this post