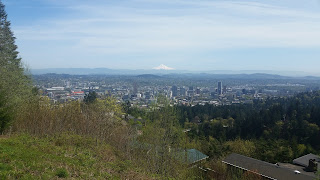 The view of the city of Portland, OR at Pittock Mansion is amazing. The mansion sits on a hill 1,000 feet up so you can see most of downtown Portland, Mount Hood and Mount St Helens. It is like the city was designed to provide this picture perfect view from the house. The mansion was the home to Henry Pittock and his family. Henry was quite a busy man. Not only was he the owner of the Oregonian newspaper, but he built an enormous empire with his wife Georgiana Burton. Their empire included banking, railroads, steamboats, sheep ranching and the pulp and paper industry. More impressive was his devotion to work, community service and his family. 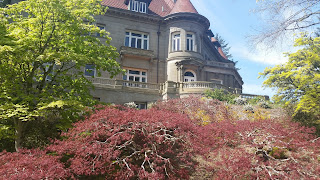 In 1909 the Pittocks commissioned architect Edward Foulkes to design a new home to share with their nine family members. Ahead of their time, they hired Oregon craftsmen and artisans and used mostly NW materials to build the house. The house was completed in 1914. 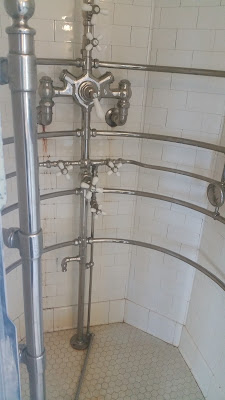 What is the most impressive feature of the mansion is that many modern inventions were used. These included the use of a central vacuum systems, intercoms, an elevator and indirect lighting. The photo above is from one of the bathrooms that has a shower in it. Other remarkably modern features are radiators and a refrigerated room. There is even one room where the radiator is fastened to the ceiling. 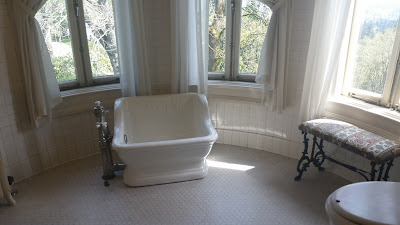 The house incorporated English, French and Turkish design styles. The estate includes the 16,000 square foot mansion, a gate lodge, a three car garage and the greenhouses. The house is very livable and modern for a house of its time. 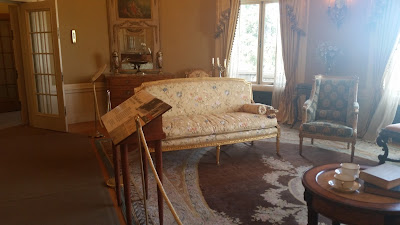 Pittock family members lived in the house until 1958, when they put the estate on the market. The empty mansion was severely damaged by a Columbus Day storm in 1962. The City of Portland purchased the estate for $225,000. It took 15 months to restore it and open it as an historical house. 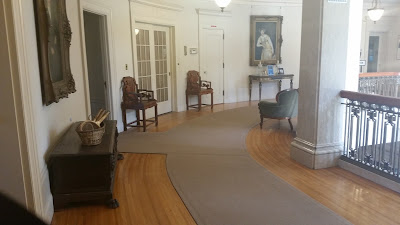 The house and its 46 acres are beautifully maintained. The mansion opens daily except for the month of January, Thanksgiving and Christmas. For more information

Michele,
I must admit I am envious of the roses in Portland that will be blooming soon. It will be two months before we see roses here. In the meantime, I'll look forward to seeing photos you take of the roses in your city. I'm also eager for updates on your progress in your community garden and other plots. I remember you were interested in guerrilla gardening. How is that going? I have heard of biodynamic gardening but I don't know too much about it. It will be nice to learn more from you as your share your interest here on Sprouts.
Thank you for the virtual tour of Pittock Mansion. How interesting! You asked if I have plants to visit any gardens soon. Most don't open for a while, but I expect I will visit my usual favorites. Three that I have never visited, which I hope to see this summer are Fuller Gardens, Enfield Shaker Museum, and Saint-Gaudens National Historic Site. All are in New Hampshire. 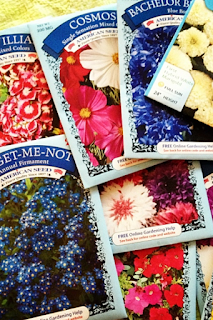 I've been starting some seeds here, but it's still early. One problem I am having is space. Where to put all the flats of baby plants until it warms up outside? Today I started some flower seeds. I wondered if there was a way to fit more seeds into a smaller space so did a search on youtube. I found NCTOMATOMAN has some interesting methods. Check out this video below. I don't need to grow as much volume as he does, however, this just might do the trick to fit more into my small spaces. Check out his other videos too. He shows how this planting turns out, as well as many other interesting projects.
Now I want to show you a seed project of mine that was successful, though it takes a lot of patience. My family enjoys eating clementines. Last winter, I wondered if the seeds might grow into a plant. I honestly didn't have high expectations but thought it would be fun to try. I created a little greenhouse from a soda bottle, put in some dirt and seeds, watered and hung it in my sunniest window. The little plants sprouted but again, I didn't think they'd grow. Some didn't but a few survived. Last summer, I repotted them and put them in my greenhouse for the summer where they continued to grow. One grew stronger than the others and is still growing well in a pot in my house throughout this winter. we also stuck a few extra seeds in the pot when we had lemons, grapefruit and clementines. A few of those have sprouted too so maybe we will get another strong candidate to repot. Now, at this point, my expectations are still realistic and we may never see fruit. But that's okay, the fun is in the trying. One never knows! 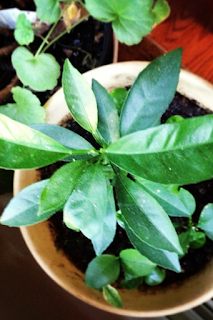 Like you, I am eager to hear what our readers have growing in their gardens and do hope we will hear from them in the comment section. ~Caroline
Posted by CK at 3:57 PM

Response to Caroline's Note: 2016 Spring Gardening Prep in Portland OR

Sorry to hear that winter is back. Here in Portland, Oregon it is another story. We have had periods of hot weather as in 80's. But, then days that it will go back to the typical damp spring weather that Portland is known for. Strange to say the least. Last week they were selling tomatoes and other warm weather crops. However, the early spring vegetables like lettuce and peas have not yet emerged in most gardens here. Everything else here is in full spring bloom, and the tulips along with a few more spring flowering bulbs are on their last legs and it is only the second week in April. Portland is known as the 'Rose City' and the roses are fully budded this week and ready to bloom. 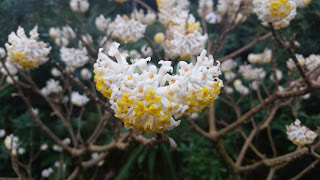 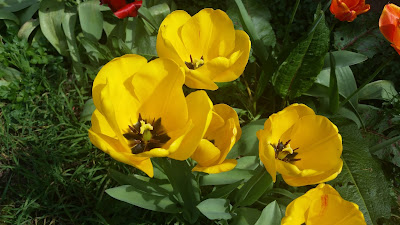 I have been busy preparing the two raised beds at my community garden and that back area that I took over. My neighbor with the goats has talked about digging up his tree lawn, as is the fashion here, and letting me and another neighbor garden. It is a sunny spot so that will be great. I am not quite sure what to plant there yet, but tomatoes and peppers come to mind.


Over the winter I have been reading up on Bio Dynamic Gardening and will be learning more about this way of organic gardening. It was developed after World War I by Rudolf Steiner who many people may be familiar with from Waldorf education. He was way ahead of his time and predicted that the bees would face population collapse around the year 2000, thanks to modern pesticides. I am still learning the key concepts, but one difference is that they plant and harvest plants according to the moon's cycle. I will be blogging more about this way of gardening as I begin to experiment with it this season. It really is fascinating!

This week I will start thinking about what trips I will be making to local gardens here for the blog. I did get started with a visit last week to Pittock Mansions. The photo above is the view from the house. You can see most of Portland and Mount Hood from that one site. It was the home of Henry Pittock and his family. He was the owner of the Oregonian newspaper and built a diverse empire. The house was completed in 1914. What is amazing is that it has a central vacuum system, intercoms, an elevator and other very modern conveniences.  Expect my post on this visit shortly.
For more information click on this link

I made another early spring visit to Crystal Springs Rhododendron Garden. Home to hundreds of Rhododendron and Azalea shrubs, spring bulbs and trees. I will be finished with this post soon. I have been so busy playing catch up with planting since I did not expect 80 plus weather in April. Do you know yet what trips you will be making and blogging about? Click here for a brochure on this garden.

I posted our new seed list here 2016 Seed List. I have more to update you on, but this post is getting very long so I will end it here and write more later. The beginning of Spring is always an exciting time for most gardeners. I would love to hear what our readers are working on. Be sure to leave us a comment.﻿

Well, spring is finally starting to show her face in our region. 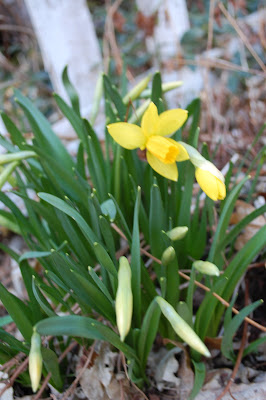 It was a mild winter, but ironically we had snowfall in April. Lately, it's just felt colder than it should. Maybe it's because the winter was so mild, it seems we should be bathed in green by now. Or perhaps it because Easter was so early this year. 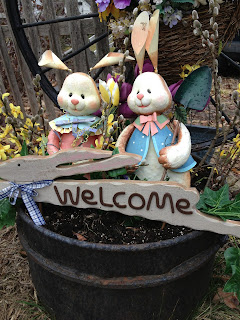 Nevertheless, I'm eager for the weather to warm up, the flowers to bloom and the trees to leaf out. 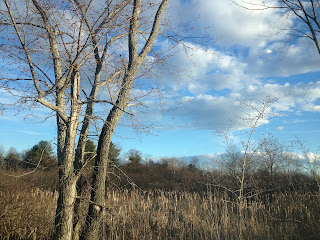 I jumped the gun back on a warm spell in March and set up my greenhouse.  It was  blown over in a matter of hours when strong winds and a cold front moved in. Live and learn. Soon I will give it another try. 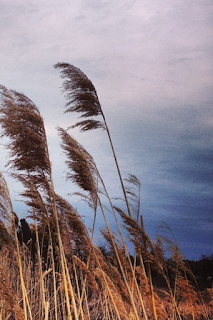 Recently, I lost one of my poplar trees. An expert from the power company said it needed to go as they can snap easily. But, we were able to keep the wood to split into firewood. 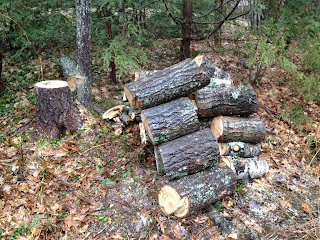 I started some seeds recently- peppers, squash, pumpkins and a variety of flowers. Some are already kind of leggy so I need to repot them. I will take your suggestion to set the stems deep in the soil to reduce some of the stem length. That's about it from here. In another few weeks, I hope to have much more garden news for you.

How are things going in your garden?