It's the end of July and all my lupines have gone to seed. I collected the dry seed pods on a nice sunny day. Getting the seeds out of the pod is as easy as shelling beans. The tiny pods are little more tricky, but still no problem. 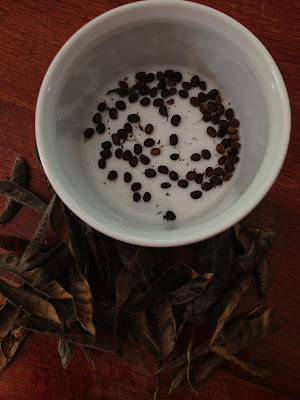 I think I'm going to plant these in the greenhouse now, so I will have baby lupine plants by fall to place around my garden. 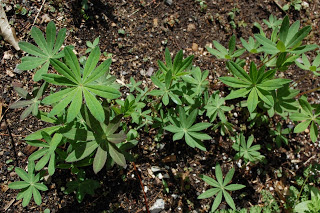 I love lupines. I've been trying to get a variety of colors, but when naturally pollinated, purple seems to dominate. I might try buying another packet of seeds from the nursery to try to get other colors too. I mostly have shades of purple, blue and pink in my garden right now. I'd love some yellows, whites, and reds. 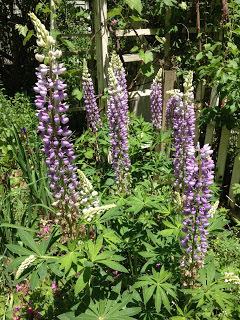 Started from seed, the plants don't flower for two years, sometimes three. So it will be a bit of a wait to find out what colors I will get in the future. But lupines are so pretty, it's well worth the wait. 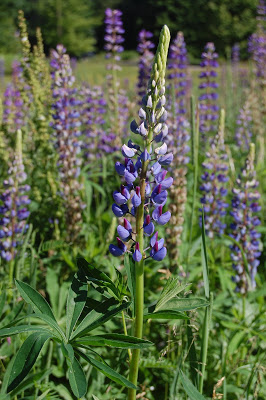 Note to Michele: The First Tomatoes of 2018

It's official! The first tomatoes of the season have ripened in my garden. I wasn't sure I'd even get any tomatoes since I'm growing most in containers this year. 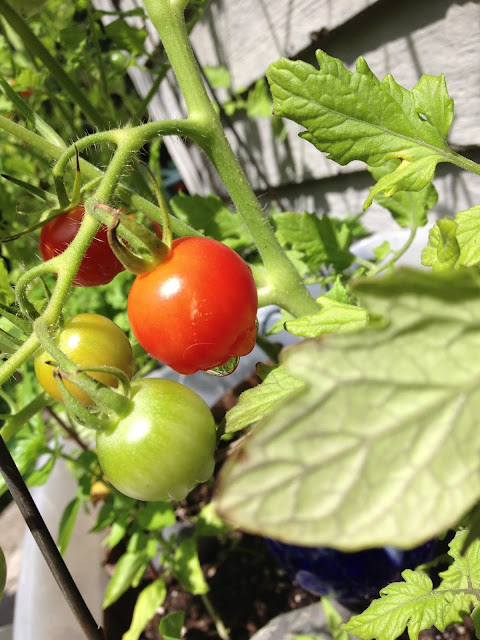 These cherry tomatoes are growing on my sunny deck 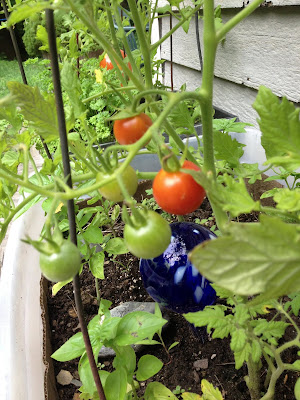 Do you have any tomatoes in your garden yet?

I had some extra seed on hand that I picked up when the price was right. I thought I'd start them now and see if I can grow microgreens. I may save a few seedlings for cold weather gardening too. These packets of seed were 10 cents each. Can't beat that price! 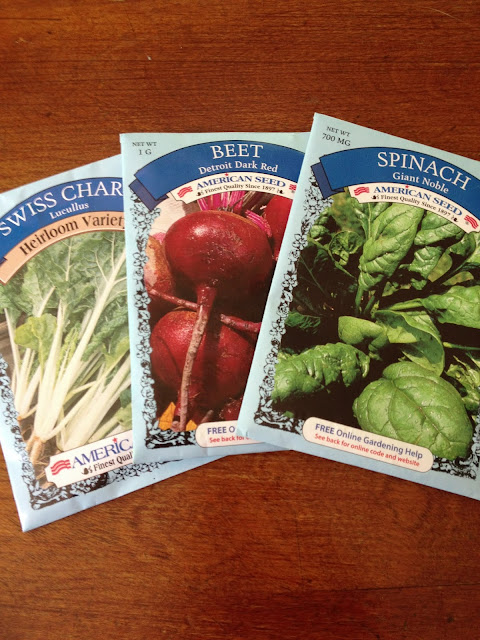 I don't know much about the science of growing micro-greens so I'm going to keep this experimental and simple. I sowed them in basic flats, in seed starting mixture and will put these in my greenhouse. The green house is basically empty right now. We have been getting so much rain lately, I want to control the water on these flats. A month ago I sowed some herbs. None germinated and my theory is things were just too soggy. Even my geraniums are not looking happy with so much water, so I'm going to put them in the greenhouse for a bit too. We are due for more rain in a few days. 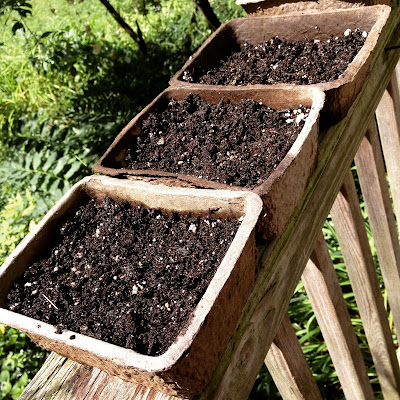 I'll be back with an update on my micro-green project in a few weeks. Hopefully I can give you a flavor report. I'm really looking forward to micro-beet greens in particular.
Posted by CK at 9:00 AM

Flower of the Week is "Russian Sage" 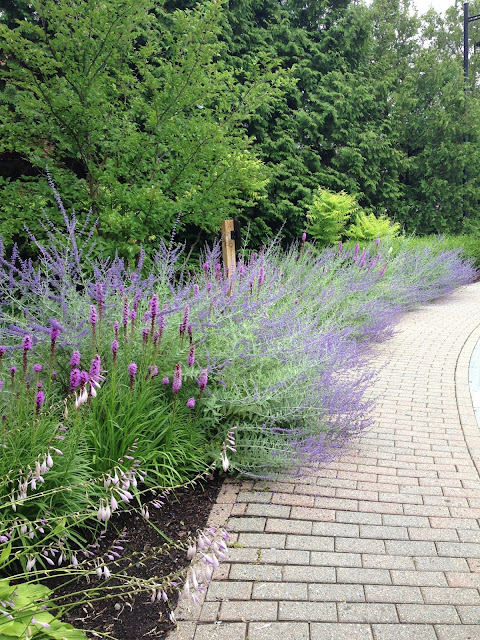 "Just living is not enough... one must have sunshine, freedom, and a little flower."

~Hans Christian Andersen
Posted by CK at 12:00 AM

Growing Grapes in My Maine Garden and a Hornworm!

This year I have more grapes on my grapevine than I have ever seen before. In addition to that, I found another grapevine has seeded in nearby. It's not producing yet, but that gives me three grapevines total. 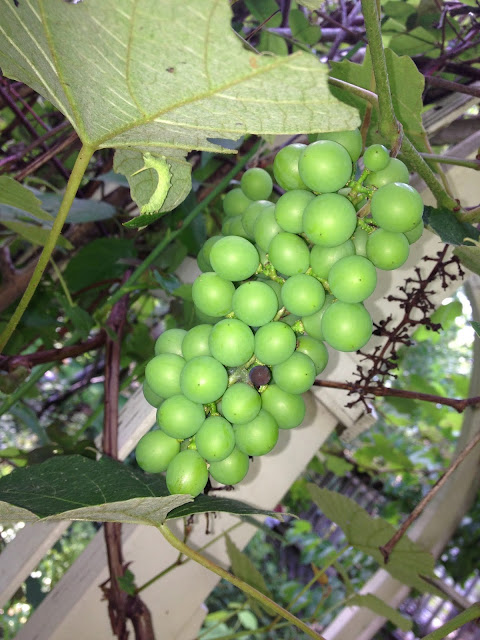 I took a picture of this nice big bunch to show everyone. Take a look close on the leaf to the left. If you can't see it, I've blown it up for you to see below. I didn't see this until much later when I took a good look at the photo. That's how well camouflaged this creature is. 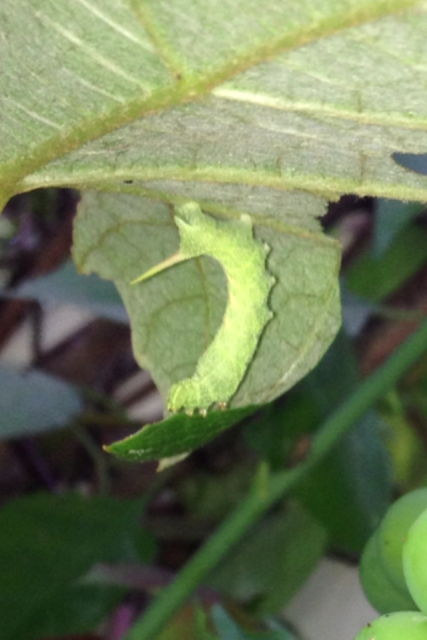 After a little research, I think it's some kind of hornworm. Perhaps a tomato hornworm, but the question is--do they also eat grape leaves? I have noticed some of the grape leaves have been decimated. However, I thought it was Japanese beetles to blame. I made my own Japanese beetle trap. Unfortunately, a raccoon seemed to think the sugary solution was for him. The next morning I found the milk jug completely empty, which was quite a feat, as it had a whole banana inside it, as well as sugar and yeast. The milk jug was still intact without a mark on it. Oh well, raccoons are talented that way. Looks like it wasn't Japanese Beetles eating my grape leaves. It was this monstrous looking caterpillar. 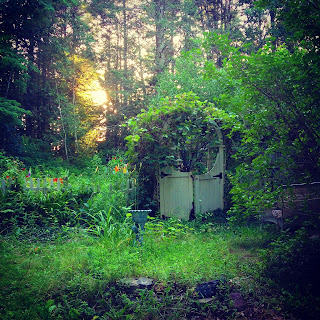 Here you can see two grapevines covering the arbor. It's the most lush and full of fruit I have ever seen it. You may remember that We planted these in 2012. In the foreground you see a statue/urn. The baby grapevine seeded in next to that. I'm not sure if I should transplant it in the fall, or let it grow where it is and find some kind of support for it right there.

Here's a video tour of Michele's garden in July. If you'd like to see other videos, visit Sprouts Gardening Youtube Channel by clicking here.

Some people collect vintage cookbooks, but I collect vintage garden books. So when I saw this gem at a book swap, I nabbed it. Perennials for your Garden was published in 1974. It was written by the legendary English gardener Alan Bloom. (and BTW....what better surname for a gardener than Bloom?) 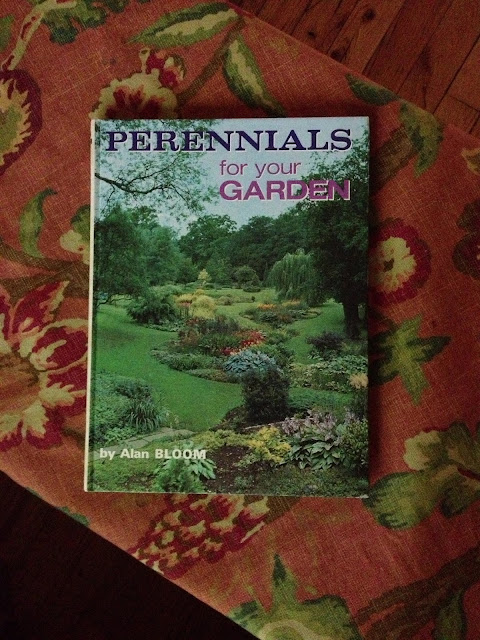 Like cooking, much garden advice is timeless. So vintage garden books are not only interesting historically, but offer practical knowledge as well. I was pleased that the colors of this book haven't faded with time. I think I will refer to it often, if only to look at the beautiful photographs taken at Bressingham Gardens in England. However, it is also filled with timeless advice regarding perennial varieties.

If you'd like to take a virtual tour of Bressingham Gardens, check out this youtube video of Adrian Bloom, Alan Blooms son.


And if you are like me and appreciate vintage gardening books, remember to check thrift stores, yard sales, library book sales and swaps to hunt for some vintage treasures for your own garden bookshelf.

While it's best to cut bolting rhubarb to prevent flowering, I missed it this year. So my Victoria rhubarb went to seed. 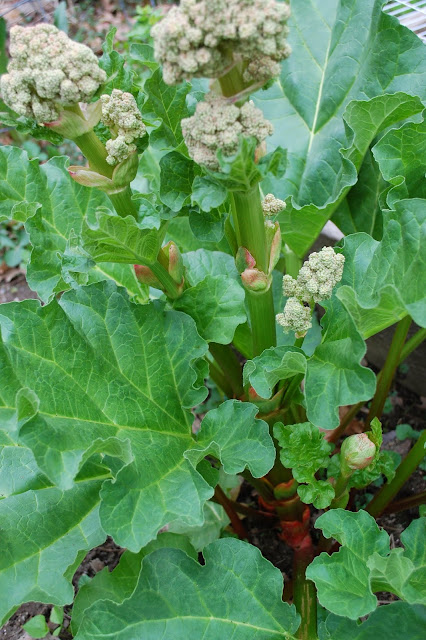 I collected the seed stalks, and I am drying them for storage. 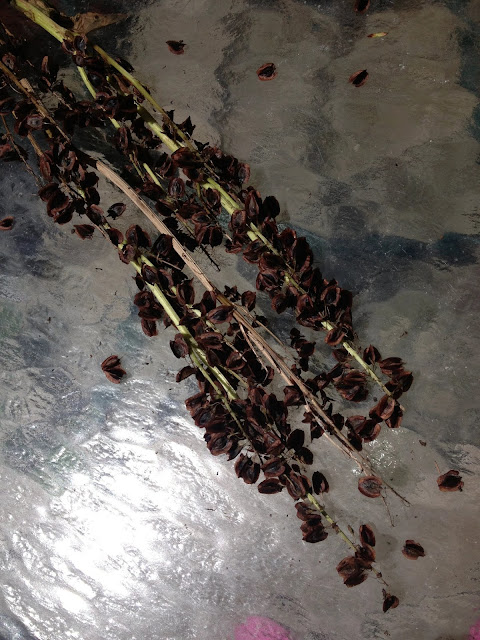 To grow as an annual, seed can be started in August. 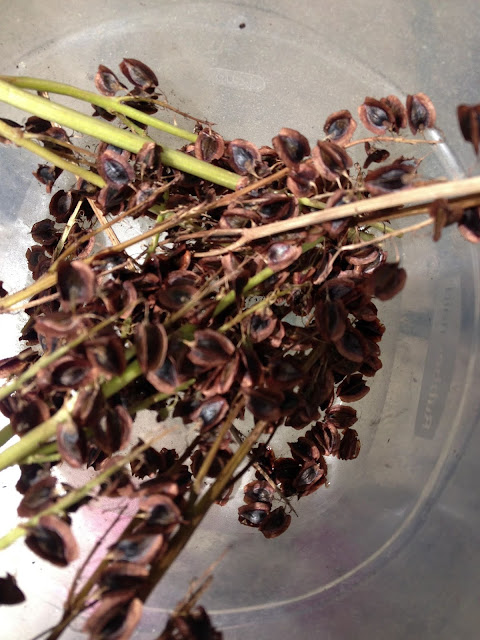 To grow as a perennial, save the seeds and start indoors in the spring, 8-10 weeks before the last frost date. This is what I'll be doing with my seeds. It will take a couple of years to produce fruit, but I think it will be fun to give it a try.
Posted by CK at 5:20 AM

A Rainbow of Nasturtiums

One of the easiest flowers to grow in the garden is the nasturtium. Every year I save the seeds from my nasturtiums to plant the next spring. Often the plants self seed, but I usually buy a few packets of seeds to plant in addition to my saved seeds. I love being surprised by the variety of colors and patterns that emerge.  Below are some of my favorites from years gone by. 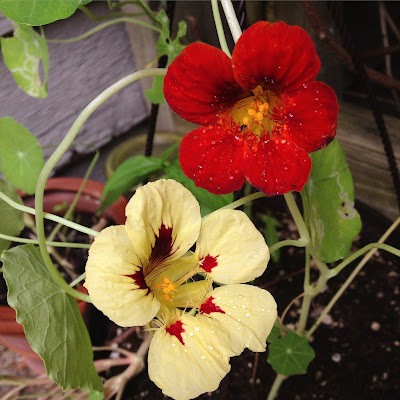 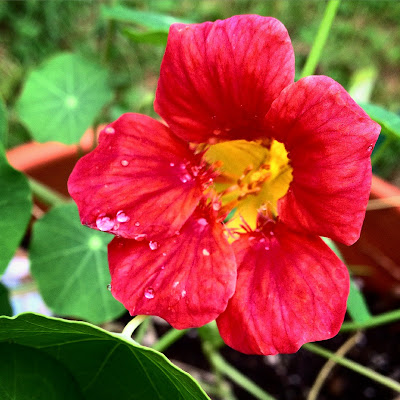 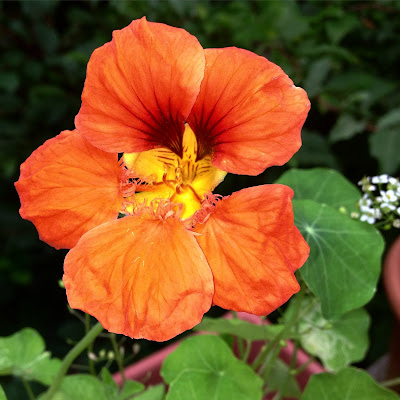 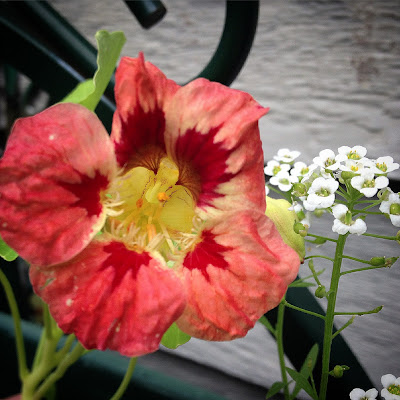 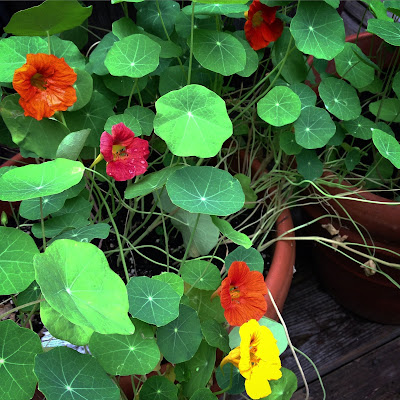 This year I am growing my produce in containers for two reasons. 1) A groundhog 2) Slugs 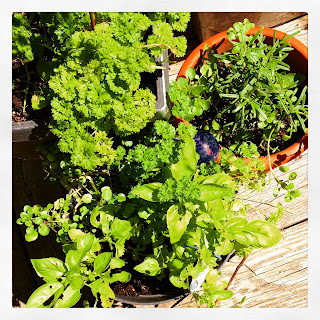 I have a variety of herbs growing in pots on my deck- basil, watercress, rosemary, oregano, parsley, chives. I also have some plants growing in the raised bed garden. The groundhog and slugs leave the herbs alone for the most part. Something is eating the basil, but I think it's an insect. 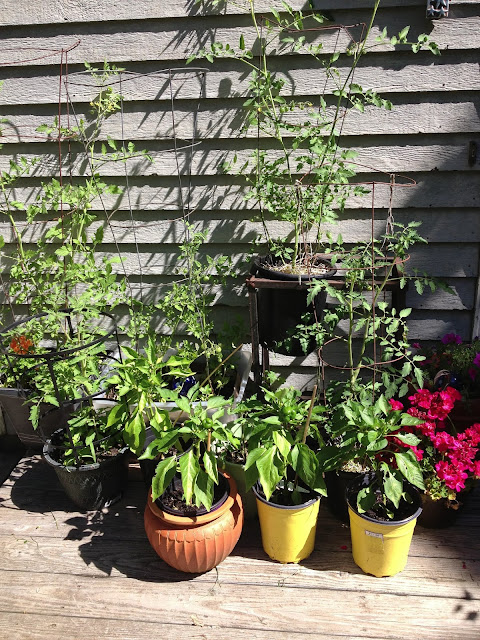 I have peppers, cucumbers, and tomatoes growing in pots. Some are on my sunny deck. And others are on an old picnic bench to keep them up off the ground and out of reach of the ground hog and slugs. I'm also starting some lettuce and sage in flats right now.

I don't think the vegetables are doing as well as when I've grown them in the raised beds, but they still have a good amount of produce coming along. Sadly, the groundhog did get to the new cucumber starts when I first put them out, so they are behind schedule. I first set them out in the raised bed, which was a mistake. When I saw them chomped off, I moved them into a bucket. 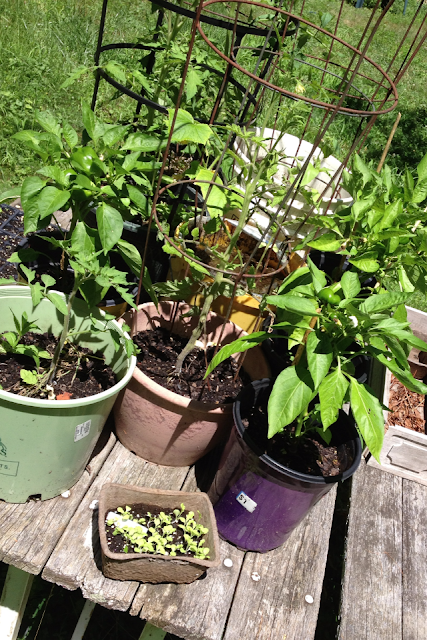 And because it's summer in Maine, I thought I'd end with this photo I took of a rocky Maine beach recently. It was a perfectly beautiful day, not too hot, not too cool, not a cloud in the sky. 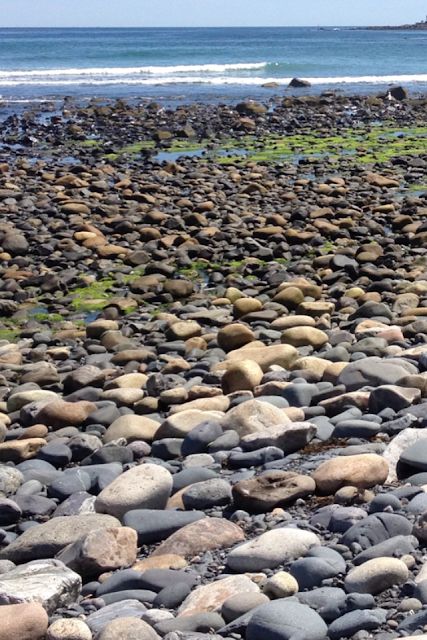 Email ThisBlogThis!Share to TwitterShare to FacebookShare to Pinterest
Labels: 2018, container gardening, Food for rabbits. food to grow for rabbits

Mid-July in My Maine Garden

A Maine Garden In July

You've seen this garden before in posts from years past. I thought you'd like to see the pretty flowers planted for 2018.