Note to Michele: Meanwhile in Maine 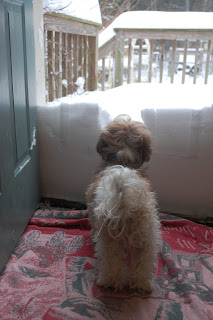 So how is the weather in Oregon? You may have heard we had a little dusting of snow this past weekend. This is what we woke up to Saturday morning when I opened the door to walk the dog. 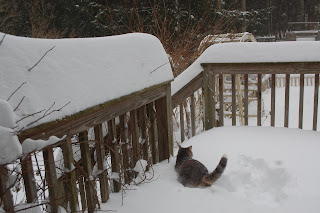 Chloe was the first to take the plunge while I bundled up for some early morning shoveling. You might call what she was doing "snow swimming" rather than walking because the snow was so fluffy and deep, she sank into it. She crawled under the deck and hid there until I shoveled a path from the door to the walkway. 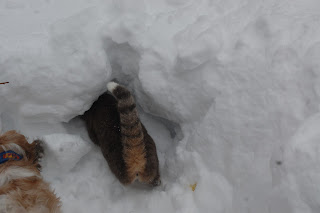 Once I'd cleared a little area by the steps, Chloe thought she'd help me and literally started digging with her front paws. It was just about the funniest thing I'd ever seen a cat do. 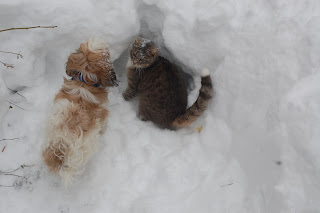 I do believe that, in some secret animal language, she was asking Nicholas to lend her hand and help her dig. 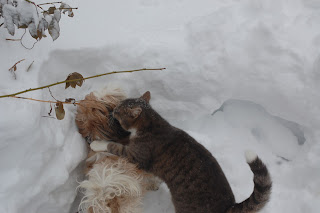 I guess he didn't understand so she made her point a little more clear. Seriously, they were just wrestling and she didn't hurt him a bit. They play like this all the time. 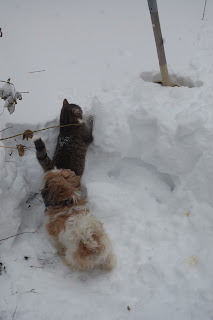 He was no help so she went back to work digging at the snow. Didn't take long before she realized it was pointless and let me do the rest.

So that was our weekend- mostly spent shoveling. I do have some new photos of my mom's amaryllis to share with you and also a Chia Pet we are starting. Other than that we're seeing more white than green around our place.

I'll be back soon with some garden talk!