How To Upcycle an Old Book Shelf into a Raised Bed 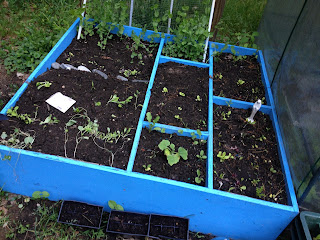 This spring I was in need of another raised bed. I had this old book shelf which originally was a do-it-yourself home entertainment center that was later turned into a child's bookshelf (note the blue color to match the child's room) and then had a later incarnation as a Barbie apartment building for my daughter's dolls.

When Barbie moved into classier townhouse digs, it was used for basement storage. It survived a flooded basement, but was damaged. So, this year, instead of heading to the landfill, it has a fifth life as a garden.

Today, it is filled with peas, lettuce, beans, and a cucumber plant. It was recently raided by a groundhog (a subject for another post) so now sports a make-shift fence, also created from up-cycled materials.

So, look at discarded items with an eye toward the garden. Don't worry too much about appearance. Once filled with plants, the container isn't so noticeable. Check yard sales, thrift stores, Craigslist freebies, and curb alerts for possible items to up-cycle. I'm not handy with power tools, so this is a good option for me. I know Michele has used dresser drawers found on the curb for her garden beds.