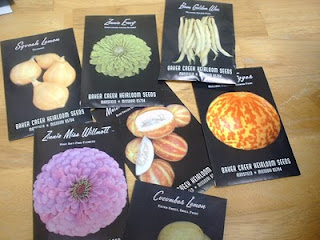 The last of the seed packets have come in. So far we have ordered all our seeds from Baker Creek Heirloom Seeds. We were impressed by their large selection of heirloom seeds and, frankly, their beautiful color catalog caught our attention.

Baker Creek Heirloom Seed is based out of Missouri. All their seeds are non-hybrid, non-GMO, non-treated and non-patented. They do not buy seed from Monsanto-owned Seminis (more about the Monsanto issue at a later date). Their catalog states that they work with a network of about 50 small farmers, gardeners, and seed growers.

Now that the excitement over finding some unusual varieties, such as ground cherries and pink bananas, has subsided, reality has set in.  Our experienced gardening friends and family chuckle while they tell us most of what we ordered won’t grow in Southern Maine, Portland Oregon or, even worse, both gardens.

Sounds like a friendly challenge to us, and feel we are more than up to trying to prove those people wrong. Hopefully, we can report at the end of the season that we had a bountiful harvest of fresh veggies and lovely flowers.

We have to admit, though, that lately it has crossed our minds about ordering some back up varieties from regional seed growers like Territorial (for Pacific North West) and Johnny’s Seed (for New England). We hate to ask, but wonder if that would be considered cheating or just being practical?
Posted by Michele Blair at 9:49 AM