First Day in the Garden, Portland 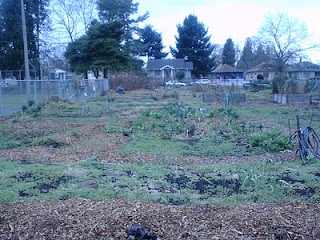 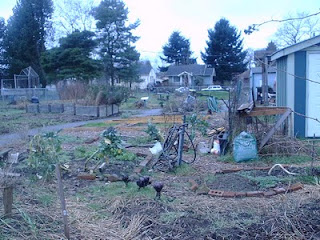 Yesterday was my first official day in the Garden. The weather forecast said high 40's, but it was so windy and cold that I almost talked myself out of going. Once there I was overwhelmed by the work that lay ahead of me. My beds were full of weeds. Weeds of the worst kind too. Grass. Luckily some of the neighbors Crimson Clover cover crop had found a home in my plot too. I found the Crimson Clover easy to pull out, but the grass was another matter.
I managed to hoe most of the grass out, because even though the soil was damp I could not pull them out by hand. While doing so I kept thinking about the section in the " Gardening West of the Cascade" book where Steve Solomon says to prioritize weeding, with grasses being the tip top priority of weeds to remove weekly.
I was a little worried that by using a hoe that the grasses would grow back , but I remember reading that even though this were to happen that the grasses would grow back weaker next time. With 4 hours devoted to this task alone on Sunday I would say that 70% of the weeds are gone.

The rest of my day was spent planting Peas in the summer plant bed as a green manure and the Snow Peas from our list to be used as food. I also made 6 trips to the community mulch area and re-mulched some of my paths. A few of the Cabbages and Kales that I planted late fall are growing, but they most of the leaves have been eaten by hungry winter critters allready. Not sure what to do about that.
On the list of Gardening projects for next week is the removal of a nasty bed of weeds growing by the chain link fence where I plan to grow the Runner Beans come May or June. It will take some serious work to remove those so I plan to lay down large sheets of cardboard and to which I am going to add a thick layer of mulch on top. I hope that by next year all the weeds will have died and I will be left with rich soil that is suitable for planting.

Posted by Michele Blair at 9:53 AM