Many years ago when we first started homeschooling, we did a unit study on the subject of desert habitats. For the project, I purchased several tiny cacti and a Magic School Bus book on the subject. I purchased the special cacti soil mix. We planted them together in a shallow dish planter. Within a few months, all but one died. We replaced those we lost. In time, all but one died. The Survivor. And so it went through the years. After a while we gave up and lived with our one cactus. This tough guy goes outdoors in April and stays on our deck until November. Then he comes inside for the winter. 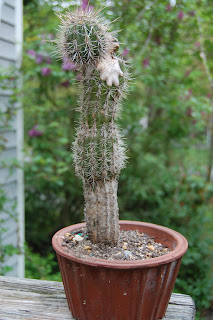 Two years ago for my son's birthday, I tried again. From the most reputable garden center around, I bought a collection of various cacti to give him. One by one they died. One, residing on our deck along with The Survivor, had a big bite taken out of it, presumably by a raccoon or skunk. Below, you see the last victim of the bunch, sadly looking like it has been attacked by some body snatching alien being that sucks all the innards out of poor, innocent cacti. This happened about two months ago. It looked perfectly normal. My son picked it up to admire and suddenly, without warning, it flopped over. Deflated like a balloon. Dead. I should give it a proper burial, but we're sort of fascinated with it. Where did the insides go? 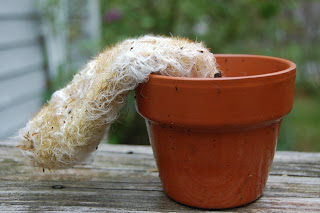 We can't grow cacti-except The Survivor. It's not surprising really because we don't have the ideal climate for this. We don't have direct sunlight in our house. Our summers are humid. Some were planted in regular pots, some in shallow proper cacti pots. Some with cacti mix, some in just ordinary soil. But, our question is, why, despite everything, does The Survivor survive? It's about 15 years old now. I don't think it's even planted in that special soil anymore. It grew too large for the original shallow dish and we transplanted it-not an easy feat with those spines. It has remained in the same pot for some time now and seems happy. It even blooms for us once a year.

Any cacti people out there who can shed some light on this for us? My son loves cacti and would like to successful keep other varieties. His birthday is around the corner. Should I try again?
Posted by CK at 12:01 AM