Hi Michele,
Today I returned to the community garden to mulch my plot. I stopped at the garden center first to buy a bale of Salt Marsh Hay for 10.99. I though it would cover the whole bed, but it didn't. We covered one end with some wood mulch provided by the garden. 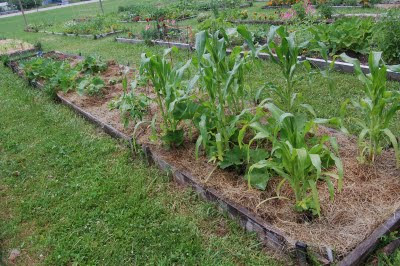 Salt Marsh Hay makes a good mulch as it is free of weed seeds. It grows in coastal salt marshes along the East Coast from Newfoundland all the way to the Caribbean. Unfortunately, it's been introduced to Oregon through shipping oysters and is an invasive species on your coast. You can read more about the invasion here. 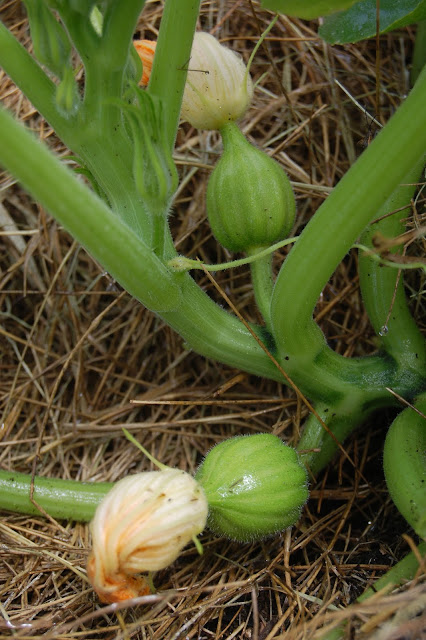 Above you see my little acorn squash just beginning to form. Everything seems to be doing well other than the watermelon plants. In talking to a fellow gardener today, I learned some beds have a yellow and black striped beetle eating some of the plants but I don't have any in my plot. She told me she used a homemade deterrent of chopped onions. She put three chopped onions in a blender with water and sprayed it on the plants. It leaves a white film on the plant when dry. Then she spread chopped onions on the soil. She said it helps to some degree, though there were still a few beetles around. She pointed out even the plots with marigolds used to repel insects had the beetles. I'm not sure why my bed is beetle free. I suspect it won't be for long.

When I got home, I googled the beetle. I think it's a cucumber beetle, which is bad news. It can attack a variety of plants, most of which I am growing. They plants with yellow blossoms. Not only do they eat the plants, but they spread fungal plant diseases as well. I did read mulch helps deter them as they like to lay their eggs at the base of the plants. I hope my Salt Marsh Hay does the trick.

My new garden friend asked me why I had planted pumpkins and beans with my corn, so I explained the three sisters. I'm thinking I should make a little explanatory sign for puzzled passersby.