Last year we removed a dying spruce tree that was growing on our property. This huge plant grew in its place. I did not plant it, it just appeared. I cut it down last fall and this year it is back even bigger and spreading with little shoots coming up around it. I think it is a Pokeweed plant. It is hard to tell from the photo but it is about 5 feet tall. 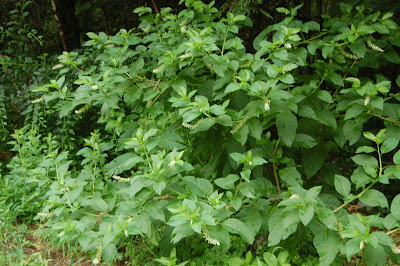 Right now it is flowering. 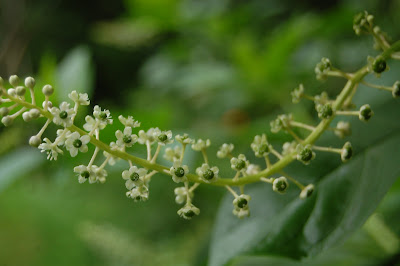 On some of the flowers, small oddly shaped berries are forming. These will turn a dark purple color in the fall. 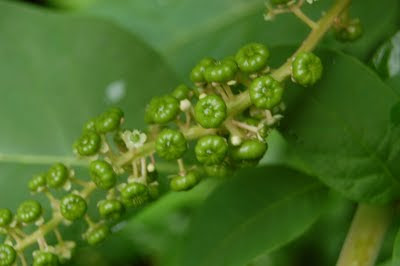 I've been doing some reading about this fascinating plant. It is toxic. Some people do eat the shoots in the spring, but if you don't cook it the proper way, you can die. Some also use it in a variety of medicinal ways. I am definitely not going to be eating this thing in any way, shape or form. It's being studied for its medicinal value and is thought to be promising in cancer treatments. The berries have been used as dye and ink. I read that the Declaration of Independence was written in Pokeweed ink. Here's a video by Green Deane at Eat The Weeds about Pokeweed.
and here's part two....
and someone else saying don't risk eating Pokeweed...
I'm not planning on using this plant but, should I remove it from my property? It's pretty, but I'm worried it could be dangerous to pets. Does anyone have any experience with this plant?
Posted by CK at 10:18 AM